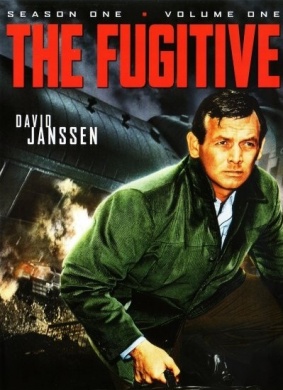 Name: Richard Kimble. Profession: Doctor of Medicine. Destination: Death Row, State Prison. Richard Kimble has been tried and convicted for the murder of his wife. But laws are made by men, carried out by men. And men are imperfect. Richard Kimble is innocent. Proved guilty, what Richard Kimble could not prove was that moments before discovering his wife's body, he encountered a man running from the vicinity of his home. A man with one arm. A man he had never seen before. A man who has not yet been found. Richard Kimble ponders his fate as he looks at the world for the last time. And sees only darkness. But in that darkness, fate moves its huge hand.

The Fugitive, a QM Production, starring David Janssen as Dr. Richard Kimble, an innocent victim of blind justice, falsely convicted for the murder of his wife, reprieved by fate when a train wreck freed him en route to the death house; freed him to hide in lonely desperation, to change his identity, to toil at many jobs; freed him to search for a one-armed man he saw leave the scene of the crime; freed him to run before the relentless pursuit of the police lieutenant obsessed with his capture.

[Pounding a confession out of Fred Johnson]