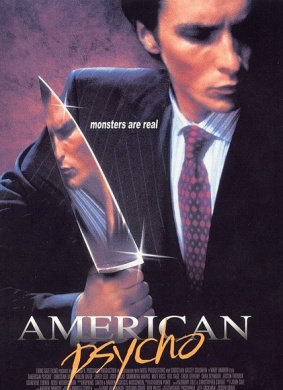 Patrick Bateman: Harold, it's Bateman, Patrick Bateman. You're my lawyer so I think you should know: I've killed a lot of people. Some girls in the apartment uptown uh, some homeless people maybe 5 or 10 um an NYU girl I met in Central Park. I left her in a parking lot behind some donut shop. I killed Bethany, my old girlfriend, with a nail gun, and some man uh some old faggot with a dog last week. I killed another girl with a chainsaw, I had to, she almost got away and uh someone else there I can't remember maybe a model, but she's dead too. And Paul Allen. I killed Paul Allen with an axe in the face, his body is dissolving in a bathtub in Hell's Kitchen. I don't want to leave anything out here. I guess I've killed maybe 20 people, maybe 40. I have tapes of a lot of it, uh some of the girls have seen the tapes. I even, um... I ate some of their brains, and I tried to cook a little. Tonight I, uh, I just had to kill a LOT of people. And I'm not sure I'm gonna get away with it this time. I guess I'll uh, I mean, ah, I guess I'm a pretty uh, I mean I guess I'm a pretty sick guy.

Patrick Bateman: Well, we have to end apartheid for one. And slow down the nuclear arms race, stop terrorism and world hunger. We have to provide food and shelter for the homeless, and oppose racial discrimination and promote civil rights, while also promoting equal rights for women. We have to encourage a return to traditional moral values.