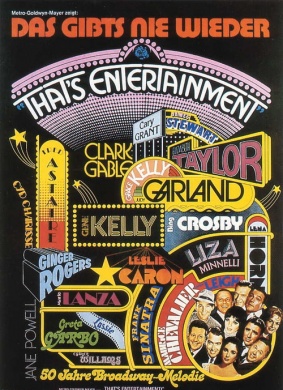 [narrating] The year is 1929; the singer, Cliff Edwards, also known as Ukelele Ike. The film: "Hollywood Revue"; it is the first all-talking, all-singing, all-dancing movie ever made. In the years that followed, "Singin' in the Rain" would become a theme song for MGM.

Through the years, MGM has produced over 200 musical films. And if you had to select one number from one film, that would best represent the MGM musicals, I have a feeling that the vote would be unanimous, especially among the people who worked here, and that's why we've saved the best for the last: "An American in Paris," starring Gene Kelly and Leslie Caron. It won an Oscar as the Best Picture of the year over 20 years ago; but the ballet from that film is as timeless as the day you and I first saw it. Produced by Arthur Freed, directed by Vincente Minnelli, and choreographed by Gene Kelly, it can only be described as MGM's masterpiece.