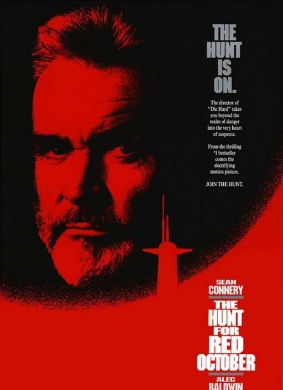 The Hunt for Red October 更多片名>

Jeffrey Pelt: Mr. Ambassador, you have nearly a hundred naval vessels operating in the North Atlantic right now. Your aircraft has dropped enough sonar buoys so that a man could walk from Greenland to Iceland to Scotland without getting his feet wet. Now, shall we dispense with the bull?

Ambassador Lysenko: You make your point as delicately as ever, Mr. Pelt.

Jack Ryan: Wait a minute. Fuel status? You have a reserve, don't you?

Helicopter Pilot: Yes, sir. I've got a ten minute reserve... but I'm not allowed to invade that except in time of war.

Jack Ryan: Listen, mister, if you don't get me on board that goddamn submarine, I might just have a war for you! You got me? Now you have ten more minutes' worth of fuel, we stay here ten more minutes!

Capt. Vasili Borodin: I will live in Montana. And I will marry a round American woman and raise rabbits, and she will cook them for me. And I will have a pickup truck... maybe even a "recreational vehicle." And drive from state to state. Do they let you do that?