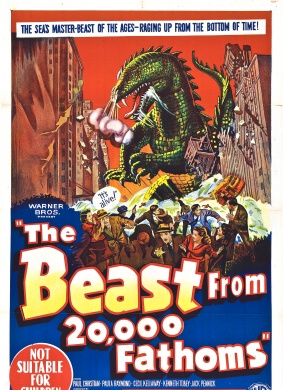 [in the diving bell, to view the monster] This is such a strange feeling, I feel as though I\\\'m leaving a world of untold tomorrows for a world of countless yesterdays.

New York is like a city besieged.A state of emergency has been delcared... and the entire police force put on 24-hour duty. Civilian defense is fully mobolized... and shelters have been opened in an effort to stop the mounting hysteria. All traffic has been halted. And Times Square, the heart of New York, has stopped beating. The National Guard has been called out, fully armed. to repell the invader.This is full-scale war against a terrible enemy... such as mondern man has never before faced. Ordinary bullets have no effect... and a method of destroying the awesome creature... has not yet been formulated. But the battle field has been cleared. Herald Sqaure. 34th Street. Broadway. Every section of the city is guarded. No one knows where the monster will stike next. It was last seen on Wall Street, close to where it came ashore. But lower Manhattan has become no man\\\'s land... where the beast, at present, lies hidden. The National Guard is barricading the entire area... in an effort to confie the death and destruction... of what is already the worst disaster in New York\\\'s history.