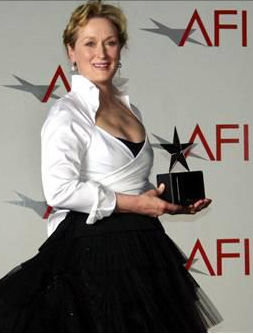 I loved working with Meryl Streep. First I worked with her on Silkwood. Alice Arlen and I did a script for her. Meryl did Karen Silkwood, and the Polish person, and the Danish person, blah-blah-blah. But the true stretch, if I do say so, was playing me in Heartburn. I highly recommend having Meryl Streep play you. If your husband is cheating on you with a carhop, get Meryl to play you. You will feel much better. If you get rear-ended in a parking lot, have Meryl play you. If the dingo eats your baby, call Meryl. She plays all of us better than we play ourselves, although it's a little depressing knowing that if you went to audition to play yourself, you will lose out to her. Some days, when I'm having a hard day, I'd call up Meryl and she'll come and she'll step in for me. She's so good, people don't really notice. I call her at the end of the day and find out how I did, and inevitably it's one of the best days I've ever had. You have no idea how much work goes into being as good as Meryl is, or for making it look as effortless as she makes it look. But I do, because one night, while we were making Heartburn, I went into her trailer. She wasn't expecting me. She wasn't in costume. And she wasn't wearing makeup. She turned out to be a 63-year-old Asian woman named Chipack. So Chipack, tonight we honor you.

I think one of our most memorable and poignant moments together was at the end of filming Plenty. And we were on our way home from Tunisia on a crowded flight, sipping champagne and we were laughing at somebody that you and I know who we were laughing at. We're not mentioning any names here! Ooooh. There's always one actor you hate on a production. Ooh, I hate him! I hate him! I hate him! We're not saying who it was, ever. And, um, we were bitching about him, and so you guess what happens? An engine blew on the plane, and the other one cut out. And we began to descend, and the lights went off, and a young air stewardess started crying, which is never a good sign! And after the initial screams, we were both very pale and we held hands, and we became reflective. And you said, "Oh damn, that woman who's writing that horrible unauthorized biography on me will have a terrific ending, peanut." And I thought, Oh God, I'm definitely gonna get second billing here, Trace. You know, I could see the headlines: "SCREEN LEGEND STREEP IN TUNISIAN AIR DISASTER. Also aboard, limey comedienne Stacey Pullman." And we made an emergency landing in Nice, France, where the charming French ground staff, not surprisingly, treated us like crap.

Even you! Even you, and you so rarely get treated like crap, then or now.