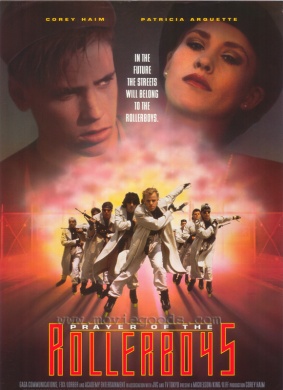 Some time in the future, USA has declined and become a country of violence and racial prejudice. Griffin earns his living delivering pizzas ...更多>

[opening narration, which also turns out to be a PATTON-esque Rollerboy-recruiting commercial] Before many of you were born, our parents caused the Great Crash. They were consumed with greed. They ignored repeated warnings, and borrowed more money than they could ever repay. They lost our farms, lost our factories, lost our homes. Alien races foreclosed on our nation while we... We were locked in homeless camps. Now America belongs to the enemy. Forget your parents. They didn't care about us. We are the New Generation, and we are the Remedy. You need a new family, a family that cares. The Rollerboys care. Join with us. Let us be your Strength. Let us be your Warriors. Help the White Army win back our homeland. The Day of the Rope is coming.

I don't hate nobody, son. Hate's the root of all evil... And evil's goddamn tempting, ain't it...? I just hope there's something left of what I saw in you two boys.