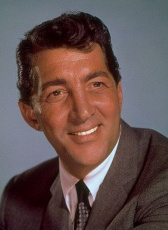 If there had to be an image for cool, the man to fit it would be Dean Martin.

Martin was born Dino Paul Crocetti in Steubenville, Ohio, to Angela (Barra) and Gaetano Alfonso Crocetti, a barber. His father was an Italian immigrant, and his mother was of Italian descent. He spoke only Italian until age five. Martin came up the hard way, with such jobs as a boxer (named Kid Crochet), a steel mill worker, a gas station worker and a card shark.

In 1946, he got his first ticket to stardom, as he teamed up with another hard worker who was also trying to hit it big in Hollywood: Jerry Lewis. Films such as At War with the Army (1950) sent the team toward superstardom. The duo were to become one of Hollywood's truly great teams. They lasted 11 years together, and starred in 16 movies. They were unstoppable, but personality conflicts broke up the team. Even without Lewis, Martin was a true superstar.

Few thought that Martin would go on to achieve solo success, but he did, winning critical acclaim for his role in The Young Lions (1958) with Marlon Brando and Montgomery Clift, and Some Came Running (1958), with Shirley MacLaine and Frank Sinatra. Movies such as Rio Bravo (1959) brought him international fame. One of his best remembered films is in Ocean's Eleven (1960), in which he played Sam Harmon alongside the other members of the legendary Rat Pack: Frank Sinatra, Sammy Davis Jr., Joey Bishop and Peter Lawford. Martin proved potent at the box office throughout the 1960s, with films such as Bells Are Ringing (1960) and Robin and the 7 Hoods (1964), again with Rat Pack pals Sammy Davis Jr. and Sinatra. During much of the 1960s and 1970s, Martin's movie persona of a boozing playboy prompted a series of films as secret agent Matt Helm and his own television variety show. Airport (1970) followed, featuring Martin as a pilot. He also played a phony priest in The Cannonball Run (1981).

His last public role was a return to the stage, for a cross-country concert tour with Davis and Sinatra. He spoke affectionately of his fellow Rat Packers. "The satisfaction that I get out of working with these two bums is that we have more laughs than the audience has", Martin said.

After the 1980s, Martin took it easy--that is, until his son, Dean Paul Martin died in a plane crash in 1987. Devastated by the loss, from which he never recovered, he walked out on a reunion tour with Sinatra and Davis. Martin spent his final years in solitude. He died on Christmas Day, 1995.