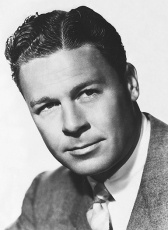 Born Ralph Bowman, the future film and TV star moved to California with his family when he was five; he attended Hollywood High and the University of Southern California. He first set his sights on a job behind the camera, taking a cinematography course at USC, but then couldn't even land an entry-level position. He later drifted into acting, on stage at the Ben Bard Playhouse and in serials at Universal and Republic. He then entered a radio contest, "Jesse Lasky's Gateway to Hollywood", where aspiring actors competed for a studio contract. The top prize, an RKO contract made out in the name of "John Archer", was won by Bowman after 13 weeks of competition (edging out Hugh Beaumont for the prize and the "Archer" name). The actor quips, "I went from being a Bowman to an Archer!" He has four children, two by wife number one Marjorie Lord (one of whom is Anne Archer) and two by his second wife Ann Leddy (whom he married in 1956).