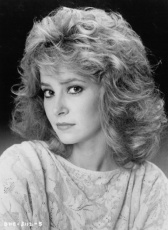 Lisa Eilbacher was born in Saudi Arabia, the daughter of an oil company executive. She spent her most formative years in Paris. After moving to Beverly Hills, California with her family, she soon appeared on television on episodes of Wagon Train (1957), Laredo (1965), My Three Sons (1960), and Gunsmoke (1955). Among her credits as a teenager is The War Between Men and Women (1972), a motion picture starring Jack Lemmon and Barbara Harris. She has since been featured prominently in many TV and film productions.