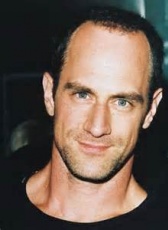 Blessed with a piercing, blue-eyed glint, brawny looks, cocky "tough guy" stance and effortless charisma, TV's Christopher Meloni has grabbed audiences' attention, male and female alike, finding breakthrough small screen stardom playing both sides of the law. Audiences first were taken in by his sexually arresting portrayal of a sociopathic killer in the gripping prison drama Oz (1997) on cable TV. Although his small screen roots were in 90s situation comedy, the network powers-that-be wisely discovered his power and allure as a dramatic star and quickly handed him his own prime-time crime series, Law & Order: Special Victims Unit (1999), as a not-quite-by-the-book crime detective. This one-two punch of "Oz" and "Law & Order: SVU" put Meloni, who seems to grow sexier with age, on the map and well on top, where he remains today.

Christopher Peter Meloni was born on April 2, 1961, in Washington, D.C., the son of Cecile (Chagnon) and Robert Meloni, an endocrinologist. Of Italian and French-Canadian parentage, he attended St. Stephen's School and played quarterback for his high school team. Developing an interest in acting rather early in life, he attended the University of Colorado at Boulder following high school graduation. He initially majored in acting but wound up earning a degree in history in 1983. Acting won out in the long run, however, and Chris relocated to New York where he studied with acting guru Sanford Meisner at the renowned Neighborhood Playhouse. Supplementing his income during these lean years by taking advantage of his powerful physique (as construction worker, bouncer, personal trainer), Meloni worked his way up the acting ladder via parts in commercials.

With a full head of hair in the early days, he broke into series TV in 1989, the first being the already-established cable football comedy 1st & Ten (1984). In this sitcom, which was HBO's very first back in 1984, Chris played ex-con quarterback Vito Del Greco (aka "Johnny Gunn"). The series' star Delta Burke had already left the cast by the time Chris came aboard in its final season. A second sitcom arrived almost immediately with the stereotypical Italian family sitcom The Fanelli Boys (1990) featuring Chris as dim-eyed, skirt-chasing Frankie Fanelli, one of the four "dees, dem and dos" sons of Brooklynite widow Theresa Fanelli (Ann Morgan Guilbert). Despite a strong, boisterous cast, the show was painfully obvious and met an early demise. True to nature, Chris gave voice and added to the fun as a cocky, mooching high school teen who knows the "how to's" of attracting pretty girl dinos in the animated prehistoric series Dinosaurs (1991).

He also made a manly mark in mini-movies with co-starring roles in such "women" dramas as In a Child's Name (1991) starring Valerie Bertinelli, Something to Live for: The Alison Gertz Story (1992), which top-lined Molly Ringwald, Without a Kiss Goodbye (1993) as the caring husband of Lisa Hartman, and the Connie Sellecca starrer A Dangerous Affair (1995). An interchangeable ability to convey both heartfelt sympathy and virile menace did not go by unnoticed. After minor parts on the big screen with Clean Slate (1994), Junior (1994) and Twelve Monkeys (1995), Chris drew strong notices in the featured role of gangster Johnnie Marzzone in the classic neo-noir Bound (1996), which earned cult status for its sexually-charged lesbian sub-storyline.

A tough recurring part on "NYPD Blue", a typical mafia role in the mini-series The Last Don (1997) and another short-lived comedic series lead (Leaving L.A. (1997)) finally led to a big payoff in the brutal and brilliant cable series Oz (1997). Christopher's introduction to the Oz prison as bisexual psychopath Chris Keller was powerhouse casting and he drew immediate notice and critical applause into the show's second season. Unflinching in its blood-soaked presentation of life behind bars, Chris' raw animal magnetism was unparalleled on the show and his steamy, erotic couplings with another male prisoner on screen promoted him swiftly to gay icon status. Undaunted by the possible career-damaging effects that could occur, Chris' frank acceptance and acknowledgment was admirable indeed and his outright support of human rights causes earned him high marks.

The father of two (daughter Sophia Eva Pietra (born March 23, 2001), and son Dante Amadeo (born January 2, 2004), he has been married since 1995 to production designer 'Sherman Williams' (The Dark Backward (1991)). Chris' sudden burst of cable notoriety earned him his own prime time NBC series. With the veteran "Law & Order" program developing a sister spin-off, Law & Order: Special Victims Unit (1999), Meloni raised the bar with his trenchant pairing with co-star Mariska Hargitay as partners of a special victims crime unit. Despite the show's reality-driven approach, Meloni and Hargitay's dynamite chemistry carried the show to a new level. Allowing their characters' more serious flaws to surface, Meloni, in particular, managed to convey Detective Stabler's private pain and personal turmoil with a raw poignancy. Both he and Hargitay have been honored with Emmy award nominations for their work here (she has won). Occasionally appearing on stage, Chris' theater credits include "The Rainmaker" (as Starbuck) (1998) and "Comers" (1998), both at the Williamstown Theatre Festival. He earned standout reviews as Eddie Carbone in Arthur Miller's "A View from the Bridge," which he performed at Dublin's Gate Theatre in 2005. In 2006 he joined the campy proceedings at an Actors' Fund of America Benefit of the soap opera spoof "Die, Mommie Die!" starring drag illusionist and "Oz" alumnus Charles Busch.

Going well over a decade's worth of service to the series that made him a household name, Meloni finally retired his TV detective in 2011. Throughout the show's run he continued to flaunt his humorous side, showing up on such parody shows as "Mad TV" and cracking up on the various night time TV haunts. On film he continues to shatter his dramatic image in such fare as The Souler Opposite (1998), Wet Hot American Summer (2001), Harold & Kumar Go to White Castle (2004) and its sequel Harold & Kumar Escape from Guantanamo Bay (2008). While he has not found outright stardom on the big screen (he has nominally played "other man" roles in such popular films as Runaway Bride (1999) and Nights in Rodanthe (2008)), Chris has more than proved his staying power since he left the popular series.

More recently, he moved forward as a writer/producer/director/star of the comedy film Dirty Movie (2011), which also has in its cast "L&O: SVU" co-star Diane Neal. In addition, Chris supplied the voice of DC Comics classic character Hal Jordan (aka Green Lantern) in the animated movie Green Lantern: First Flight (2009). He also has held regular roles on the series True Blood (2008) in 2012 and Surviving Jack (2014) as well as strong cinematic parts in the Superman film Man of Steel (2013) and in Small Time (2014).