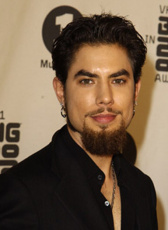 Born June 7, 1967 to James Raul 'Mike' Navarro and Constance Colleen Hopkins. His paternal grandfather was an illegal alien from Mexico; his mother, Constance, was a model and worked on Let's Make a Deal (1963). After his parents divorced when he was seven, Dave moved with his mother to Bel Air, and lived with her until she was murdered in March 1983 by her boyfriend. Her murderer was eventually caught thanks to the help of America's Most Wanted (1988). While at a skating park, Dave heard a Jimi Hendrix song, and decided to become a professional guitar player. After stints in both Jane's Addiction and Red Hot Chili Peppers (during his time with the latter group, Dave caused a sensation when he smooched band mate Flea on the cover of "Guitar" magazine) and turning down offers to join Guns N' Roses, he started his own band, "Spread", and released a solo album, "Trust No One".