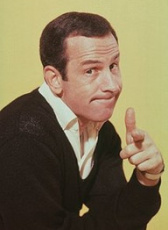 Don Adams was born in New York, to a father of Hungarian Jewish descent, and a mother of German and Irish ancestry. He had a sister, Gloria, and a brother, Dick Yarmy. He served in the U.S. Marines in World War II and contracted malaria during the fighting on Guadalcanal island. After the war he began a career as a stand-up comic. He married singer Adelaide Adams and adopted her last name as his stage surname. He had seven children altogether, (four with his first wife, two with his second, one with his third): Caroline Adams, Christine, Catherine, Cecily Adams, Stacey Adams, Sean, Beige. His television career began when he won the Ted Mack & the Original Amateur Hour (1948) talent contest. His most famous role, of course, is as bumbling, incompetent, clueless yet endearing secret agent Maxwell Smart in the classic sitcom/spy spoof Get Smart (1965), although he also had a career as a television director and a Broadway and theatrical dramatic actor.