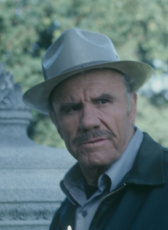 A golden career was reflected in his name. Robert Golden Armstrong ("Bob" to his friends) was born in Birmingham, Alabama on April 7, 1917. He attended the University of North Carolina at Chapel Hill. While there, he was frequently performing on stage with the Carolina Playmakers. After graduating, R.G. headed to New York, where his acting career really took off. In 1953, along with many of his Actors Studio buddies, he was part of the cast of "End As a Man" -- this became the first play to go from off-Broadway to Broadway. The following year, R.G. got his first taste of movies, appearing in Garden of Eden (1954). However, he returned to New York and the live stage. He received great reviews for his portrayal of Big Daddy in the Broadway production of "Cat On a Hot Tin Roof" in 1955.

In 1958, R.G. took the plunge to Hollywood -- he appeared in two movies, a television series, and did numerous guest appearances on television series that year, usually in Westerns such as The Rifleman (1958), Have Gun - Will Travel (1957) and Zane Grey Theater (1956), among others. He would go on to appear in 80 movies and three television series in his career, and guest-starred in 90 television series, many of them Westerns, often as a tough sheriff or a rugged land baron. R.G. was a regular cast member in the television series T.H.E. Cat (1966), playing tough, one-handed Captain MacAllister. During the filming of Steel (1979) in Kentucky, watching the mammoth Kincaid Tower being built, he made some good friends in the cast: "You become a family on the set," he said in an interview at the time.

Even though he had a long, versatile career, the younger generation knows him as the demonic Lewis Vandredi (pronounced VON-drah-dee), who just would not let the main characters have a good night's sleep on the television series Friday the 13th: The Series (1987). Finally retiring after six successful decades in show business -- his last film appearance was Purgatory (1999) -- R.G. and his lovely wife Mary Craven were mostly just enjoying life in California, and still traveled and vacationed in Europe occasionally. His upbeat, fun-loving personality made him a delight for all who come in contact with him. R.G. Armstrong died at age 95 of natural causes in Studio City, California on July 27, 2012.