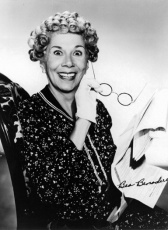 Bea Benaderet had a remarkable career in radio and television. In the earlier days of radio, before television, she provided the voice for numerous names of characters on the radio, on shows like "Fibber McGee and Molly," "My Favorite Husband" with Lucille Ball & the Jack Benny Show. She was born in New York City but raised in San Francisco and made her radio debut when she was 12 years young. After doing voice-overs and various roles, Orson Welles gave her a regular role on "Campbell Playhouse." Bea made a smooth move from radio to television as she was cast in the role as Blanche Morton in The George Burns and Gracie Allen Show (1950). It was because of her role as Blanche that she could not accept the part of Ethel Mertz in I Love Lucy (1951), which was offered to her by Lucille Ball and Desi Arnaz. She also provided the voice for several Warner Brothers cartoons, usually for females (those Mel Blanc could not do), like Tweety's owner, "Granny". Later, she worked with Blanc again on one of the most famous cartoons, Tweetie Pie (1947). It was 1947's Academy Award winning animation short of the year, featuring "Tweety", (the yellow Canary) & "Sylvester, the Siamese Cat".