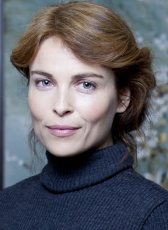 Born in 1973, Irina Björklund is one of the most popular Finnish film stars of the end of 1990s and beginning of the 2000s. After studying years 1993-1996 in The Theatre Academy of Finland she made her silver screen debut in Pekka Parikka's (director of Talvisota (1989)) last film, Tie naisen sydämeen (1996)". Another actor on the film was Peter Franzén who become her husband in the same year.

Björklund's first big film role was in Rukajärven tie (1999), a highly popular Finnish war movie based on Antti Tuuri's novel. Björklund's husband Franzén was in the leading male role, Björklund made leading female role. She was nominated for Best Actress in Jussi Awards. Jussi Awards are the biggest Finnish movie awards, like the Oscars are in the USA.

Björklund made her Hollywood debut in low budget horror movie The Dummy (2000), but returned in Finland to make Levottomat (2000) and Minä ja Morrison (2001), both highly popular movies. She won Best Actress prize in Jussi Awards for her performance in "Minä ja Morrison". After that she has been working in Europe and Hollywood, but still her biggest roles has been in Finnish films: Vieraalla maalla (2003), Honey Baby (2004) and Blackout (2008).