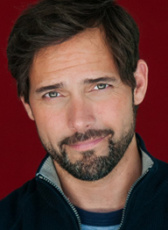 Born in Boston and raised in Vermont, Andrew Bowen's career began when - after seeing the movie Grease he announced to his parents that he "wanted to be like John Travolta when he grow up." With his parents full support, 6 month's later, he performed in his first play and after hearing his audience roar with laughter for the first time.... he never looked back.

Over the next 12 years, Andrew studied Modern Jazz & Ballet and appeared in dozens of local theater productions in Vermont from Pippin to Guys and Dolls. At the end of his freshman year in High School, a bit of good luck (a director chose his grandmother's house to shoot a commercial at) landed Andrew an agent in New York. He began commuting to the city several times a year to audition and finally, after 4 years of being the "Callback" kid, Andrew landed his first role - as Katheryn Erby's love interest George Stark in the Bill Murray/Richard Dreyfuss comedy What About Bob?

Although he received a personal letter from director Frank Oz before the film's release informing him that his role had ended up on the cutting room floor (essentially becoming the extra that just wouldn't go away) he headed for Hollywood undaunted. He was in the union, inspired by the advice Bill and Richard had given him and ready to become a star.

Andrew began booking commercials and small movie and TV gigs almost immediately and for the next few years built his resume and honed his craft. His first big break finally came a few years later when he was cast as the lead in Capcom's a live-action interactive video game Fox Hunt playing Jack Fremont - a character best described as 'James Bond meets Dumb and Dumber'. The character gave Andrew a chance to do everything from slapstick physical comedy to drama and martial arts. His performance wound up being so funny, the game was was turned into a feature film, developed as a TV series and landed Andrew a Talent Deal at Warner Brothers Television.

While waiting for the Fox Hunt pilot to be shot, Bowen (having studied screenwriting at USC) wrote, directed, financed and shot a short film called Lone Defender, intended as an auditioning piece to play Peter Parker for director James Cameron's Spider-Man movie. He also wrote a very personal and moving coming of age script for what would eventually be his directorial debut "Along The Way" .

After the Fox Hunt pilot was not picked up, Andrew joined the cast of the 5th season of Fox's "Mad TV" where - due in no small part to his uncanny impressions - he was quickly called one of the "New Talents to watch" by TV Guide.

After a season on the show, with the help of his father, Bowen raised enough money to realize his dream to make his directorial debut "Along the Way". Production started that fall where, aside from his directing and producing duties, he gained over 40lbs to play the films tragic outsider, Jocko. A year later, after receiving rave reviews and Winning ~ Best Feature~ at the Wilmington International Film Festival, Bowen's hopes of distribution were dashed when he found out his producer had stolen funds and the distribution company, while holding his semi-complete masters, went bankrupt: taking the film away from him for over a decade.

Thought crushed by the loss of his film Andrew had started a family, found the love of a great women buckled down, kept moving forward and re-start his career. Luckily, Andrew's determination paid off as he has continued to write and land steady acting work ever since.

An established voice-over talent, Bowen has lent his voice to some of the most successful video games of all time including - Johnny Cage in Mortal Kombat X, Josh Birk/Nyte Blayde in Saint's Row (3-4), "Doc" in the Star Wars: The Old Republic, "Sev" in Killzone 3. and "Private Hudson" in Aliens: Colonial Marines based on James Cameron's massive hit.

Bowen can currently be seen in the horror anthology Holidays opposite Lorenza Izzo (which premiered at the 2016 Tribeca Film Festival), Relativity's Summer Forever (with Megan Nicole and Alyson Stoner) and as the lead in Eric Won's award winning web-series The Division (available on Hulu).

In 2016, Bowen finished work on the feature Tribes of Palos Verdes (starring Jennifer Garner) and will be seen in the black comedy All For Nikki and John Asher's powerful Autism drama PO (with Christopher Gorham and Julian Feder) that has won three best picture and two best acting awards since it's festival debut in April of 2016.

A producer & accomplished screenwriter, Bowen has optioned several scripts and is currently in active development on two his high concept TV series and his latest feature The Mcauliffe Equation.

A father of three and devoted family man (his son Seth Lucas Bowen has appeared in several commercials, Shameless, Rock Jocks & CBS's Bad Teacher) Andrew's laughter, exceptional range and ability to inhibit a wide range of complex characters has contributed to his continuing rise as a talented character actor and a commanding and charismatic leading man.