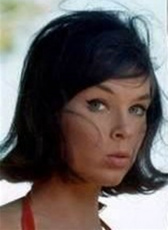 Yvonne Joyce Craig was born on May 16, 1937 in Taylorville, Illinois. As a young teenager, Yvonne showed such promise as a dancer that she was accepted to Denham's Ballet Russe de Monte Carlo. Her training progressed until she left the company in 1957 over a disagreement on casting changes. She moved to Los Angeles hoping to continue her dancing, but was soon cast in movies. At first, Yvonne had small roles in movies such as Gidget (1959) and The Gene Krupa Story (1959). After that, her film career just bumped along. As Yvonne was dating Elvis Presley at the time, she did have a supporting role in the two Elvis movies, It Happened at the World's Fair (1963) and Kissin' Cousins (1964).

But her fame would come with the cult television series Batman (1966) in which she played Commissioner Gordon's daughter, Barbara. Her secret identity was Batgirl and as the Commissioner's daughter, she had access to all the calls of trouble that was taking place in Gotham City. Her character, Batgirl, was part of the 1967-68 season, which was the end of the run for the series. After Batman (1966), she also appeared on other television series such as Star Trek (1966) and The Six Million Dollar Man (1974). As her career wound down, Yvonne went into the real estate business. Yvonne Craig died at age 78 of breast cancer at her home in Pacific Palisades, California on August 17, 2015.