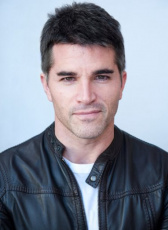 Martin Crewes, was born in Barnet, London, England in the year 1968. At age ten, he moved to Perth, Australia. He graduated in 1990 from the Western Australian Academy of Performing Arts with a Bachelors of Arts degree in Musical Theater. His father David, who was born in New Zealand, was a performing arts actor, participating in many plays in the UK and Australia, such as the Homecoming (1968). His younger sister Amanda Crewes is also an actress, and graduated from WAAPA in 1998 with a Bachelors in Performing Arts. She just finished performing in the Barking Gecko Theatre Company's production, The Rodeo Kid. His mother Elizabeth and aunt Marie were also performing arts actresses, and the Crewes family were part of Playlovers, an organization that features amateurs in theater in Floreat, WA Australia, for many years. Martin is mainly a Performing Arts actor. His Australian theater credits include: Barnum, The Wizard of Oz, Aspects of Love, Joseph and His Amazing Technicolor Dreamcoat, West Side Story.

Martin is also a TV actor, and has appeared in many Australian TV shows such as Neighbours, RFDS, Phoenix and The Newlyweds. In 1995 Martin went to Asia to perform the role of Lt. Joe Cable in the musical South Pacific in Chiang Mai, Thailand. In 1996, he played Marius in the international tour of Les Miserables performing in Singapore, Hong Kong, Korea and Cape Town. In 1997, Martin moved to and worked in the UK, and again performed the role of Marius in Les Miserables in London's West End. Martin also appeared in many other musicals while living in London, such as The Rink and Pal Joey .

Martin gained popularity in the UK when he spent two years in the hit Sky TV series Dream Team (1997), as the Hispanic player and manager Luis Amor Rodriguez. In this role, he gained recognition, because of the illicit love affair between his character Luis Amor Rodriguez, and the chairman's wife, Linda Block.

In 1999-2000, he played Anthony Sullivan in series 1 and 2 of ITV mini- series Daylight Robbery (1999). In December 2000 Martin performed the opening number of the Royal Variety Performance. Two years later, Martin portrayed the role of Kaplan in the film Resident Evil (2002). He returned to Australia in late 2001, and has done 3 musicals. "Oh! What a night", "Hair" and from August to October 2002, he portrayed the role as "The Man" Jim Ryan in "The Man from Snowy River Arena Spectacular", which was a huge success through out Australia. His most recent performance was when he played Marius in a concert tour of "Les Miserables" in Denmark, Sweden, Norway and Finland in October and November 2002.