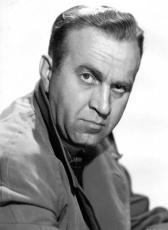 Howard da Silva was one of 324 actors, writers and directors who fell victim to the Hollywood blacklisting of the early 1950s, and had his career halted in the blink of an eye. Originally was a steelworker before making his stage debut at age 20 in New York. He made a name for himself on Broadway before going to Hollywood, but kept up his stage work after making the move to films. His most memorable performance came in the 1943 Broadway production of Oklahoma!. In Hollywood, he became a well-liked character actor, appearing in such films as Sergeant York (1941), The Big Shot (1942) and The Lost Weekend (1945). In 1947, his career was threatened when the House Un-American Activities Committee (HUAC) began its investigation into alleged Communist influence of Hollywood. Actor Robert Taylor, called as a "friendly witness", accused many of his fellow actors and writers of either being communists or having communist sympathies. When questioned about da Silva, Taylor said, "I can name a few who seem to sort of disrupt things once in a while. Whether or not they are communists I don't know. One chap we have currently, I think is Howard da Silva. He always seems to have something to say at the wrong time." On November 25, 1947, a meeting of Hollywood executives held in New York released a statement known as the Waldorf Statement, in which they announced a blacklist would be immediately imposed aimed at anyone named or suspected as a communist. "We will forthwith discharge or suspend without compensation those in our employ and we will not re-employ any of the ten until such time as he is acquitted or has purged himself of contempt and declares under oath that he is not a communist." Howard appeared in a few more films before he was called before HUAC, refused to answer any of the committee's questions and was promptly blacklisted by the studios. He continued working in the theatre, and once the blacklist was lifted in the early 1960s made a return to film and television. He passed away two years after making his last movie.