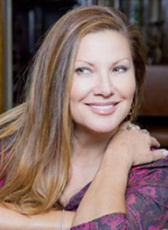 Liliana Komorowska (maiden name Glabczynska), received her MA degree with honors from the Zelwerowicz State Theater Academy in Warsaw in 1979. In 1980, she made her debut performance in a Masterpiece Theater production of "The Crucible" as "Abigail", winning the Best Actor Award from the Polish Television Academy. From then on, her acting career spanned from television, through stage and feature film. Throughout the years at the renowned Dramatic Theatre in Warsaw, she performed with the masters of the Polish stage. Some of the most prominent of her roles were those in Gombrowicz's Operetta, Racine's Britannicus, Diderot's Jacques the Fatalist, and Shakespeare's As You Like It.

She was part of the finest period of the Polish Masterpiece Theater, with a number of memorable roles: "Roxanne" in "Cyrano de Bergerac", "Linda Manion" in "Anatomy of a Murder" and her role of a prostitute in Arthur Miller's "Death of a Salesman", by the side of the icon of the Polish theater, Tadeusz Lomnicki. Liliana's accomplished stage career was complemented by a number of film roles.

She worked with such excellent directors as Krzysztof Zanussi in Kontrakt (1980) (aka "Contract") and "A Man Fom a Far Country" for Jerzy Kawalerowicz appeared in Smierc Prezydenta and in Austeria as Jedwocha, one of her most acclaimed film roles. At the time of the martial law in Poland, in 1982, she was offered a part in an American production of War and Love (1985), starring Kyra Sedgwick, directed by Moshé Mizrahi (Oscar winner for Madam Rosa (1980)). The movie became a turning point of her career.

After the filming, she decided to stay in the USA and explore the world's largest and most influential film and television market. Her American career developed steadily and, as before, in this new environment, she remained involved in a wide variety of artistic enterprises, continuing her work in film, theatre, and TV. From 1984, she played leading roles in American TV daytime series including: Another World (1964) for NBC (as "Daphne Grimaldi", 1985), As the World Turns (1956) for CBS (as "Angela Visconti", 1986), One Life to Live (1968) for ABC (as "Anabella Corto", 1987). She starred in an off-Broadway drama "Shots at Fate". This period also brought leading film roles in TV productions such as: Simon & Simon (1981), The Equalizer (1985), Kojak: Ariana (1989) and a guest-starring role in a CBS pilot "The Saint".

Liliana's feature film credits of this period include an indi production Astonished (1990) with her lead role as "Sonia" - a female counterpart of "Raskolnikov" from "Crime and Punishment", opposite 'Charles Dutton' (Alien³ (1992)), and Her Alibi (1989), with the part of Paulina Porizkova's sister in a duet with Tom Selleck, a comedy directed by Bruce Beresford (Oscar winner for Driving Miss Daisy (1989)).

In the years 1989 - 91, while in Europe, Liliana signed a contract with the BBC for a role in an acclaimed TV serial Mother Love (1989), starring the great Diana Rigg (BAFTA award for the best British TV series). In the meantime, she played in a Polish-French co-production "Napoleon", American series Veronica Clare (1991) and Acapulco H.E.A.T. (1993), a CBS miniseries Lucky Chances (1990), based on a screenplay by Jackie Collins.

Another chapter in her career started with a role in a sci-fi horror Scanners III: The Takeover (1991)

a film which had a major influence on her life. This is where she met

her future husband, one of the most acclaimed Canadian directors, Christian Duguay. Liliana and Christian embarked on a very creative and successful partnership of an actress and a director as well as wife and husband.

Roles that followed include such films as Screamers (1995) with Peter Weller (RoboCop (1987)), _Red Light(1999)_ with Tomas Arana, produced by the famous brothers Tony Scott and Ridley Scott (GALAXY award for the best Canadian TV film). Her next role in The Assignment (1997) put her on screen next to movie stars Aidan Quinn, Donald Sutherland and Ben Kingsley.

The line-up of her latest roles feature such films as a mini series for CBS Joan D'Arc (13 nominations for EMMY), a feature Suspicious Minds , starring Patrick Bergin and Gary Busey, and a leading female role in a recent CTV production The Royal Scandal (2001) and the latest thriller by Christian Duguay The Art of War (2000), starring Wesley Snipes and a high impact action feature Extreme Ops (2002), opening in North America on 27 November 2002.

Liliana Komorowska lives in Montreal, Canada, where she is actively involved in both English and French film and TV.