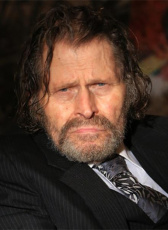 An instinct for acting showed very early for Bruce in 1935,he didn't know it was acting when at 3 he distracted his Mom from the worries of Depression Era Chicago by recreating stuff they'd seen at the movies like FDR struggling to walk, putting his little body thru it, to try to understand by experiencing it. A knack for comedy showed when as part of a church pageant his 1 line ''No room at the Inn.'' booming hugely out of a tiny body sent the whole congregation into laughter. He so enjoyed it he repeated it even louder to louder laughter then again and again continuing even as he's chased by the minister all over the alter to gales of laughter. A memory that still makes him laugh. At 6 he had his 1st., job 60 cents for 6 days of delivering groceries. From then on there was always a job after school,Saturdays and Summers like 4 yrs. On a Chicago Loop news stand in winter cold, at age 14 Summer heat in a glass factory ladling molten glass. At age 15 his desperate father asked him to quit school to help support the family,his mother saved him by herself taking a job. A good thing school was showing him 2 paths out of the working class, Art , selling paintings and football [1949] Chicago high school city champs and a chance for scholarships, played 2 college seasons and moonlighted on a semi pro team. Then a new window opened ,posing at an Art Institute class with a naked lady who said ,''How would you like to-[pause] - be a Gorilla ?'' She was a stripper and needed a guy strong enough to wear a 90 lb. Ape suit and toss her around. A magician at the club tapped him jokingly with hie magic wand ''Saying ,'' Bruce you are an actor.'' A new thought. Drafted into the army for the Korean war served there for the last 6 months of that war came back with malaria delaying his football ,tried out for a play [1955] had never had an acting class or read a book on it, but he was a natural, got the lead and great reviews, went to summer stock did a new play every week. He did 12 years of theatre including On and Of Broadway. He visited Hollywood in 1965 and in 1967 made it his home for T.V. and Film where he's continued to show his versatility creating a unique separate person for every role.