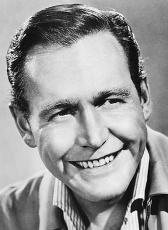 American actor and occasional screenwriter. One of the most frequently seen heavies in films and television programs of the 1950s, his name is nevertheless well known only to buffs. Occasionally he played minor leads and sympathetic characters, but his stern good looks and rich deep voice made him a memorable villain, particularly in Westerns.