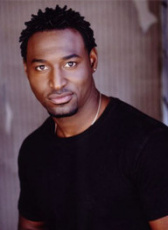 Born in Wrexham, North Wales, Adrian Holmes is a descendant of Barbados, who grew up in Vancouver and now makes Vancouver and Los Angeles his home.

With over 100 television credits including "Arrow" and the comedy "Impastor", one of his fan favorites was his recurring role of "Basqat" on the long running CW series, "Smallville."

Whether it be on television, big studio blockbusters or more independent productions, Holmes' is driven not only by telling a great story but one that allows him to really grow and show his versatility as an artist.

His mantra of "be ready so you don't have to get ready" served him well in his initial audition for the 2011 feature "Red Riding Hood." Director Catherine Hardwick (Twilight) spontaneously asked if he could do an African accent, Holmes delivered thus transforming his role of "Captain." The film brought Holmes international recognition and allowed him the honor of working alongside one of his favorite actors, Gary Oldman.

In 2013 Holmes got to collaborate with Matt Damon and Jodie Foster in the SyFy feature "Elysium." Directed by Neill Blomkamp (District 9), Elysium illuminates how a segregated class system creates an unhealthy, unfair & unbalanced world.

Now in their fourth season shooting in Montreal, Holmes' leads the cast of Bravo's critically acclaimed original series, "19-2." Winning Best Drama at the Canadian Screen Awards, and most recently nominated for an International Emmy Award for Best Drama. It has been hailed by the press: The "Huffington Post" stated "You will be on the edge of your seats, guaranteed." The Hollywood Reporter announced "Rebooted Quebec drama '19-2' has breakthrough in English Canada." Yahoo Celebrity News proclaimed "It's unlike anything you have seen on Canadian Television" and the New York Times stated "The series is in the tradition of shows like "The Wire," portraying law enforcement less flashily and less noisily than others, and thus more accurately."