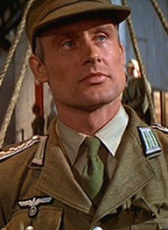 Wolf Kahler is a German born character actor who, thanks to his height (6'2") and blue eyes was often cast as a Nazi or unsympathetic German characters in his career. He has appeared in several successful franchises (Indiana Jones, The Dirty Dozen), both playing a Nazi officer named Dietrich, and most recently was cast as Dr. Hoffmanstahl in Sherlock Holmes: A Game of Shadows.