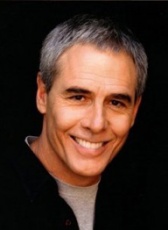 At 19, John felt compelled to pursue his passion and moved to Los Angeles to learn his craft and become a serious actor. He initially went about it by taking two years at the Film Industry Workshop and then went on to study with some of the best in the business.

After only two years of living in Hollywood, John landed two feature films, then his first series "White Shadow," which allowed him to get a breakout role in "An Officer and Gentleman."

Paramount took note and springboarded him in to "Footloose" alongside Kevin Bacon. Laughlin then landed a three-picture deal starting with a lead in "Crimes of Passion" starring Kathleen Turner. He also had a significant role in "The Rock" with Sean Connery.

Laughlin was offered a once-in-a-lifetime opportunity to pursue his other personal passion, philanthropy. He took a break from the industry and worked with a nonprofit organization in order to concentrate on helping children in need.

Having had that dream fulfilled, he has returned to the industry he always loved by booking several great parts on "Criminal Minds" and "The Defenders" and is working on several of his own productions as well.

He has had multiple starring roles in both film and television, as well as numerous guest-star and supporting roles throughout his career.