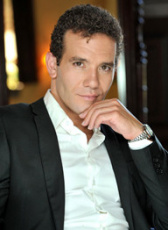 A Los Angeles native and UCLA theater graduate, Aaron became a recognizable player of the Disney Studios stable, appearing in many of their beloved films, including "The Mighty Ducks" series and "Newsies". A veteran of both the small and big screen, he appeared in the film adaptation of the Tony and Pulitzer Prize winning Broadway musical "Rent" directed by Christopher Columbus. Aaron has forged a strong working relationship with the renowned NY Public Theater appearing in several of their productions. Aaron's inaugural performance at The Public was in Tony award winner George Wolfe's acclaimed production of "Radiant Baby". This lead to his starring role in "See What I Want To See" by multiple Tony award nominee Michael John LaChuisa. Many remember Aaron's starring role in the potent and topical political drama "In Darfur" both at The Public and The Delacorte Theater. Aaron received his Master's Degree in Criminal Justice from John Jay in New York City and worked for the Jeffrey Descovic Foundation re-examining cases for the wrongfully convicted. He currently plays a critical role as Recovery Specialist/Therapist at an in-patient mental health and chemical dependency facility in Malibu California, working closely with some of the most prominent psychiatrists, addiction specialists, and therapists in the field of mental health and chemical dependency.