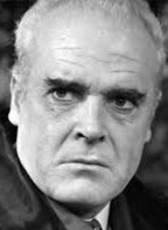 Born in Armagh, Northern Ireland, Patrick Magee is a classic example of how certain actors rate the stage far more highly than the screen. Magee was well aware that the vast majority of the films that he appeared in were dreadful (he mostly played sinister villains in horror films), but the money came in very handy in financing his distinguished stage work (he was a favorite actor of Samuel Beckett one of whose greatest plays, 'Krapp's Last Tape', was written specifically for him). However, he did do some outstanding work on film, most notably in Stanley Kubrick's A Clockwork Orange (1971) as the crippled writer Mr.Alexander, and in Kubrick's Barry Lyndon (1975), as the chevalier. He also appeared in Joseph Losey's The Servant (1963), Peter Brook's Marat/Sade (1967) and William Friedkin's The Birthday Party (1968). He also appeared in films by such cult directors as Roger Corman, Lucio Fulci and Walerian Borowczyk.