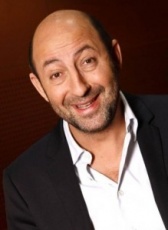 When joining Oui FM, a Paris radio station, he met Olivier Baroux and founded the comedy duo "Kad et Olivier" with him. They have hosted several radio and television shows.

Is of Algerian descent.

After founding his first rock group at the age of 10, he later worked at a club Med with his own band "Gigolo Brothers".

Has his look-alike puppet in the French show Les guignols de l'info (1988).