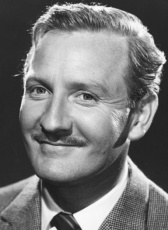 A much-loved comic actor who has specialized in playing plummy, quintessentially English stereotypes, Leslie Phillips' heart was in acting from a very young age. He received elocution lessons as a child in order to lose his natural cockney accent (at that time a regional British accent was a major impediment to an aspiring actor) and he attended the Italia Conti School.

During the Second World War, he served with the Durham Light Infantry (1942-45) until he was invalided out suffering from shellshock. He returned to acting, and it was during the 1950s that he established himself as a notable player in British movies. His greatest claim to fame to this day are the "Doctor" series of movies, which he inherited from Dirk Bogarde. He also worked on radio, most notably 'The Navy Lark' for the BBC.

In later life, he returned to playing supporting roles and even appeared in Steven Spielberg's Empire of the Sun (1987). He continues to make cameo appearances in films and television and is a regular guest on British chat shows.