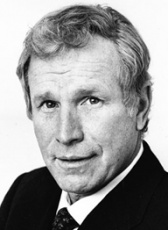 Tough around the edges and with a handsome durability, Alabama-born Wayne Rogers had graduated from Princeton with a history degree in 1954 and joined the Navy before giving acting a thought. During his military service, however, he became associated with theater by happenstance and decided to give it a try after his discharge. He started things off by studying with renowned acting teacher Sanford Meisner and dancer Martha Graham at the Neighborhood Playhouse. He toiled for years in off-Broadway and regional plays ("Bus Stop", "No Time for Sergeants") and had a short stint on the daytime soap The Edge of Night (1956) before making a minor dent in films, including small roles in Odds Against Tomorrow (1959), The Glory Guys (1965) and Cool Hand Luke (1967). He also co-starred opposite Robert Bray in the short-lived TV western series Stagecoach West (1960) and co-produced and wrote the script for the cult sci-fi cheapie The Astro-Zombies (1968) in-between. It wasn't until 1972, when the 39-year-old Rogers nabbed the role of "Trapper John", a Korean War surgeon, in the classic comedy series M*A*S*H (1972), that he found the stardom that had eluded him for over a decade and a half. Alongside Alan Alda's "Hawkeye Pierce", the TV show was a huge hit and the two enjoyed equal success at the beginning. Slowly, however, Wayne's character started getting the short end of the stick as the wry, sardonic, highly appealing Alda became a resounding audience favorite. Frustrated at turning second-banana to Alda, he quit the series (his character was discharged) after three seasons amid a contractual dispute. Mike Farrell replaced him in the cohort role of "B.J. Hunnicut". TV movies came his way throughout the late '70s and a couple more comedy series, including House Calls (1979), in which Wayne received a Golden Globe nomination, but nothing would equal the success he found during the M*A*S*H (1972) years. Sporadic filming in Once in Paris... (1978), The Hot Touch (1981), The Gig (1985) and The Killing Time (1987) also failed to raise his amiable profile. In later years, Wayne found renewed respect as a businessman and investor, having managed the affairs of such stars as Peter Falk and James Caan, among others.