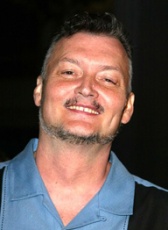 Born in Martinez, California, 20 miles outside San Francisco, Victor Salva had written and directed over 20 short and feature-length films before graduating from high school. In the mid-'80s his 37-minute short Something in the Basement (1986) took first place in the fiction category at the Sony/AFI Home Video Competition. A horror allegory about a young boy awaiting his brother's return from a bloody war, this highly acclaimed short went on to win several national awards (including a Bronze Plaque at the Chicago International Film festival) and brought Salva to the attention of Francis Ford Coppola. Coppola then produced Salva's first theatrical feature, Clownhouse (1989), which Salva again wrote and directed. Using the talented cast of his award-winning short, Salva called the film "a campfire story." However, his early career was derailed by the revelations of sexual misconduct with one of the film's underage stars. He was tried, convicted and spent a year in state prison. He described it as "a dark time in my confused young life, but also a time when I took responsibility for my own arrested development and the ramifications of growing up in a deeply dysfunctional family."

His next film brought him to Los Angeles. Based on characters he met in prison, The Nature of the Beast (1995), which Salva wrote and directed, starred Lance Henriksen and Eric Roberts and quickly became New Line Cinema's biggest direct-to-video title of that year. Salva next made his first big-studio picture, Powder (1995), a strange tale about an albino boy with special powers that ironically make him an outcast. "Powder" received much critical acclaim and made several top-ten lists for the year.

He next made Rites of Passage (1999), a coming-of-age thriller starring Jason Behr (Roswell (1999)), Dean Stockwell and James Remar which dealt with a homophobic father who unwittingly pushes his gay son into the arms of a psychotic killer. In 2001 Salva wrote and directed Jeepers Creepers (2001), which was one of the year's breakout hits and set a world record for largest Labor Day box-office in history, up until that time. Salva followed this up with his sixth feature film, Jeepers Creepers II (2003), breaking his old record and setting another Labor Day milestone, as of 2003. His next film, Peaceful Warrior (2006), an adaptation of Dan Millman's best-seller "The Way of the Peaceful Warrior", was very significant to him because of the year he spent in prison. The film starred Nick Nolte and Amy Smart.