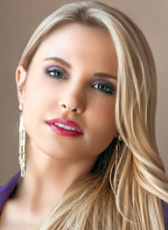 Jacqui Holland was born in the suburbs of Cincinnati, Ohio. After many retched snowy winters, she headed to Hollywood to put her acting and writing skills to work. While in LA, Jacqui acted in several sitcoms, including "How I Met Your Mother" (2005), "Desperate Housewives" (2004), "Quintuplets" (2004), "Suburgatory" (2011), "Workaholics" (2011) and as Chewy's sexy assistant on "After Lately" (2011). She also appeared in numerous films, most notably starring in Hollywood Sex Wars (2011) and working opposite Kate Hudson in My Best Friend's Girl (2008). In 2011, she co-wrote, produced and starred in her first feature film, "Hotel Arthritis" (2011), a veteran star-studded campy comedy/horror. Now having formed "Pom Pom Pictures", Jacqui is continuing to write and produce within the realms of comedy and recently completed a web trilogy starring Eric Roberts. Besides working, Jacqui also enjoys bedazzling, interpretive dance, and Kundalini yoga. She is also the proud mother of two beautiful Pomeranians, "Bunny" and "Boots".