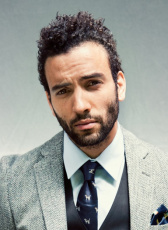 Shortly after graduating drama academy, Marwan joined the Amsterdam Theater Group, where he performed in various plays such as Roman Tragedies, Opening Night and Angels in America. He received critical acclaim for his powerful and brooding leading role in Wolf (dir: Jim Taihuttu, 2013), which won him the Golden Calf for Best Actor at the Netherlands Film Festival. Consequently, the International Film Festival Berlin selected Marwan as a Shooting Star 2014 - one of the most promising European actors -, while Variety introduced him as 'International Talent You Should Know'. This year he can be seen in Autobahn, directed by Eran Creevy opposite Anthony Hopkins, Felicity Jones, Nicholas Hoult and Ben Kingsley. Next up is Ben-Hur by director Timur Bekmambetov, in which he plays the role of Drusus.