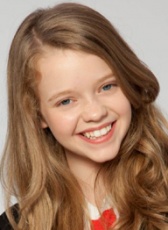 Jade Pettyjohn began performing on a professional level by booking a national commercial followed by a major role on the CBS hit show The Mentalist. While shooting The Mentalist she landed a recurring role on Steven Speilberg\'s United States of Tara.

2010 was a banner year in television and film. She worked on NBC\'s The Cape and CBS\'s Criminal Minds:Suspect Behavior. When word of her maturity and strength in acting spread to the producers of the film Prodigal, she starred alongside Academy Nominated director and actor, Kenneth Branagh, as a powerful child with extraordinary abilities.

In 2011 she booked the role that would capture the hearts of young audiences everywhere in the feature film An American Girl: McKenna Shoots for the Stars. For this role she trained for several weeks with the Canadian junior Olympic team learning the world and behaviors of competitive gymnastics. The film and "doll of the year" were released in 2012 and the McKenna doll remains the biggest annual selling doll of the franchise. That same year Jade booked a guest starring role on the NBC series Grimm, playing a troubled young creature.

In 2013 Jade landed a pivotal recurring role on JJ Abrams hit series Revolution as the young Charlie. She then stepped into a new world of rodeos and horses playing a troubled young orphan in her next feature film, Dakota\'s Summer, that will be released this year.

Currently she is shooting a recurring role in Michael Bay\'s upcoming new post-apocalyptic series The Last Ship starring Eric Dane where she enjoys using her British accent as the daughter of British actor Sam Spurell.

Although Jade leads a busy life she maintains strait A\'s at school, and among her many activities donates time performing on stage for various fund-raisers, enjoys playing guitar and writing songs and listening to music.