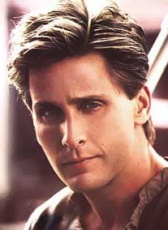 Emilio Estevez was born on May 12, 1962, in New York City. He is the eldest son of actor Martin Sheen, who at the time was just breaking into the business. His mother, Janet Sheen (née Templeton), was a former New York art student who had met Emilio's father right after he had moved to Manhattan. Martin and Janet had three other children, Charlie Sheen, Renée Estevez, and Ramon Estevez, all of whom became actors. His father is of half Spanish and half Irish descent, and his mother, whose family is from Kentucky, has English and Scottish ancestry.

He lived on Manhattan's Upper West Side until his family relocated to Malibu in 1968. Before graduating from Santa Monica High School in 1980, Estevez had already had a small role as a messenger boy in Apocalypse Now (1979), that was ultimately cut from the film.

Though his father had opted to use the stage name "Sheen" over his more ethnic birth name "Estevez," Emilio chose to retain the family name, hoping to avoid riding his father's coattails. He also thought the double "E" set of initials was "pretty."

He appeared in a few TV movies, the first of which was Seventeen Going on Nowhere (1980), before making his big-screen debut opposite Matt Dillon in 1982's Tex (1982). A part in The Outsiders (1983) followed, and Estevez made his first big splash as the punk rocker Otto in the cult classic Repo Man (1984).

Originally cast as Bender (The Criminal) in the seminal John Hughes flick The Breakfast Club (1985), Estevez took the part of Andrew (The Athlete) instead after Hughes could find no one else to fill the role. Another ensemble film, St. Elmo's Fire (1985) came next. Then Estevez made his screen-writing debut with That Was Then... This Is Now (1985), a film in which he also starred.

He then starred in the Stephen King thriller Maximum Overdrive (1986), but the film was a failure. The ambitious young actor added directing to his palette with Wisdom (1987) in 1986, but the film was universally panned and struck out at the box office. Estevez quickly rebounded with hits like Stakeout (1987) and Young Guns (1988), as well as their subsequent sequels. He tried his hand at directing again with Men at Work (1990) before taking on one of his most famous roles as Coach Gordon Bombay in The Mighty Ducks (1992). The enormously popular Disney film spawned sequels and an NHL hockey team of the same name, but Estevez was interested in making weighter films.

He agreed to make a brief appearance in D3: The Mighty Ducks (1996) in exchange for Disney helping him finance and distribute another effort as actor-director, The War at Home (1996). Though smiled on by critics, The War at Home (1996) received a paltry distribution by Disney and thus went largely unseen. A devastated Estevez considered quitting the business but has ultimately continued to work in films, including a fourth effort as director and star, Rated X (2000), which co-starred brother Charlie Sheen and was a selection at the Sundance Film Festival. In 2006, Bobby (2006), a film about the assassination of Senator Robert F. Kennedy that Estevez wrote, directed, and acted in, premiered at the Venice Film Festival and received a seven-minute standing ovation.