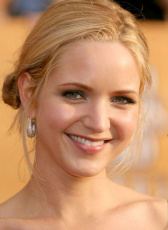 Jordana Spiro was born April 12, 1977 in New York City. She is best known for her role as "P.J. Franklin" on the television series "My Boys". Jordana Spiro studied acting at the Royal Academy of Dramatic Art in London.

Jordana Spiro stands at a height of 5 feet 7 inches. She is not currently married and is of Greek and Jewish heritage