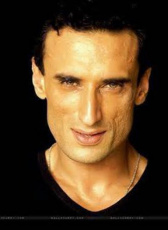 Rahul Dev is an Indian film actor and former model. He predominantly works in Hindi, Punjabi, Telugu, Malayalam, Tamil, Kannada and Bengali films.He made his debut in the 2000 film Champion where he played a villainous role for which he was nominated for the 2001 Filmfare Best Villain Award. He also appeared as a villain in the Punjabi movie Dharti in 2011.In December 2013, Dev made his television debut playing the role of demon Arunasur in the mythological TV series Devon Ke Dev...Mahadev.Dev's wife Rina died of cancer on 16 May 2009. The couple had been married for 11 years and have a son.